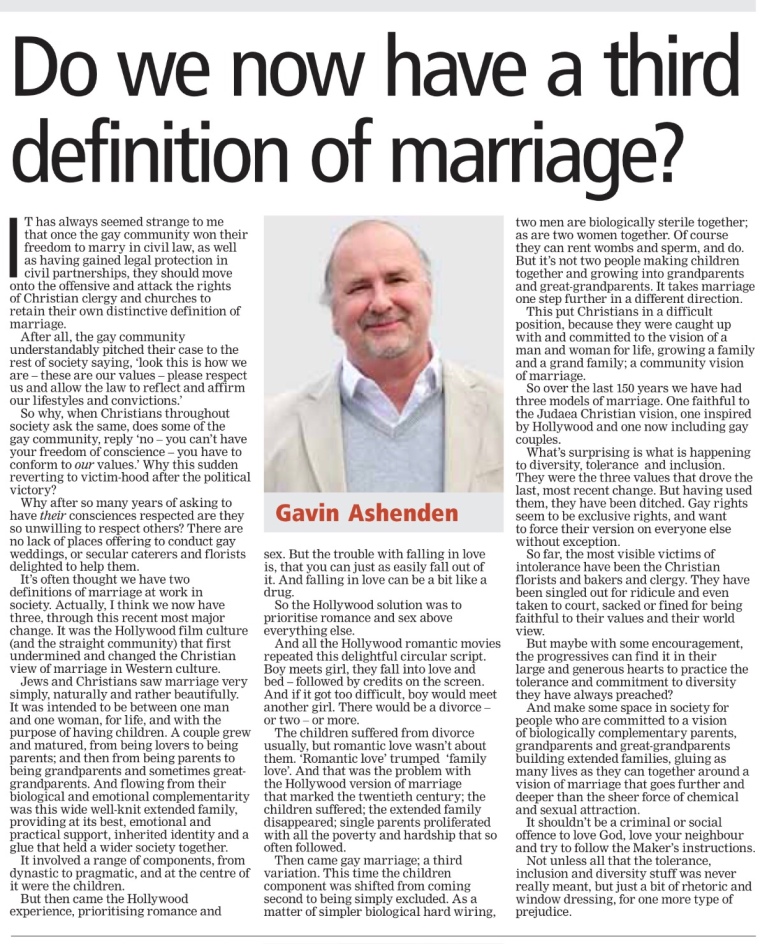 It has always seemed strange to me that once the gay community won their freedom to marry in civil law, as well having gained legal protection in civil partnerships, they should move onto the offensive and attack the rights of Christian clergy and churches to retain their own distinctive definition of marriage.

After all, the gay community understandably pitched their case to the rest of society saying, “look this is how we are – these are our values- please respect us and allow the law to reflect and affirm our life styles and convictions.

So why, when Christians throughout society ask the same, does some of the the gay community, reply “no- you can’t have your freedom of conscience- you have to conform to our values. Why this sudden reverting to victim-hood after the political victory?

Why after so many years of asking to have their consciences respected are they so unwilling to respect others? There are no lack of places offering to conduct gay weddings, or secular caterers and florists delighted to help them.

It’s often thought we have two definitions of marriage at work in society. Actually, I think we now have three, though this recent most major change. It was actually the Hollywood film culture (and the straight community) that first undermined and changed the Christian view of marriage in Western culture.

Jews and Christians saw marriage very simply, naturally and rather beautifully. It was intended to be between one man and one woman, for life, and with the purpose of having children. A couple grew and matured, from being lovers to being parents; and then from being parents to being grandparents and sometimes great grandparents. And flowing from their biological and emotional complementarity was this wide well-knit extended family, providing at its best, emotional and practical support, inherited identity and a glue that held a wider society together.

It involved a range of components, from dynastic to pragmatic, and at the centre of it were the children.

But then came the Hollywood experience, prioritising romance and sex. But the trouble with falling in love is, that you can just as easily fall out of it. And falling in love can be a bit like a drug.

So the Holly wood solution was to prioritise romance and sex above everything else.

And all the Hollywood romantic movies repeated this delightful circular script. Boy meets girl, they fall into love and bed,- followed by credits on the screen. And if it got too difficult, boy would meet another girl. There would be a divorce – or two- or more.

The children suffered from divorce usually, but romantic love wasn’t about them. ‘Romantic love’ trumped  ‘family love’. And that was the problem with the Hollywood version of marriage that marked the twentieth century; the children suffered ; the extended family disappeared; single parents proliferated with all the poverty and hardship that so often followed.

Then came gay marriage; a third variation. This time the children component was shifted from coming second to being simply excluded. As a matter of simpler biological hard wiring, two men are biologically sterile together; as are two women together. Of course they can rent wombs and sperm, and do. But it’s not two people making children together and growing into grandparents and great grandparents. It takes marriage one step further in a different direction.

This put Christians in a difficult position, because they were caught up with and committed to the vision of a man and woman for life, growing a family and a grand family; a community vision of marriage.

So over the last 150 years we have had three models of marriage. One faithful to the Judaea Christian vision, one inspired by Hollywood and one now including gay couples.

What’s surprising is what is happening to diversity, tolerance  and inclusion. They were the three values that drove the last, most recent change. But having used them, they have been ditched. Gay rights seem to be exclusive rights, and want to force their version on everyone else without exception.

So far, the most visible  victims of intolerance have been the Christian florists and bakers and clergy. They have been singled out for ridicule and even taken to court, sacked or fined for being faithful to their values and their world view.

But maybe with some encouragement, the progressives can find it in their large and generous hearts to practice the tolerance and commitment to diversity they have always preached?

And make some space in society for people who are committed to a vision of biologically  complementary parents, grandparents and great grandparents building extended families, gluing as many lives as they can together around a vision of marriage that goes further and deeper than the sheer force of chemical and sexual attraction.

It shouldn’t be a criminal or social offence to love God, love your neighbour and try to follow the Maker’s instructions.

Not unless all that the tolerance, inclusion and diversity stuff was never really meant, but just a bit of rhetoric and window dressing, for one more type of prejudice.